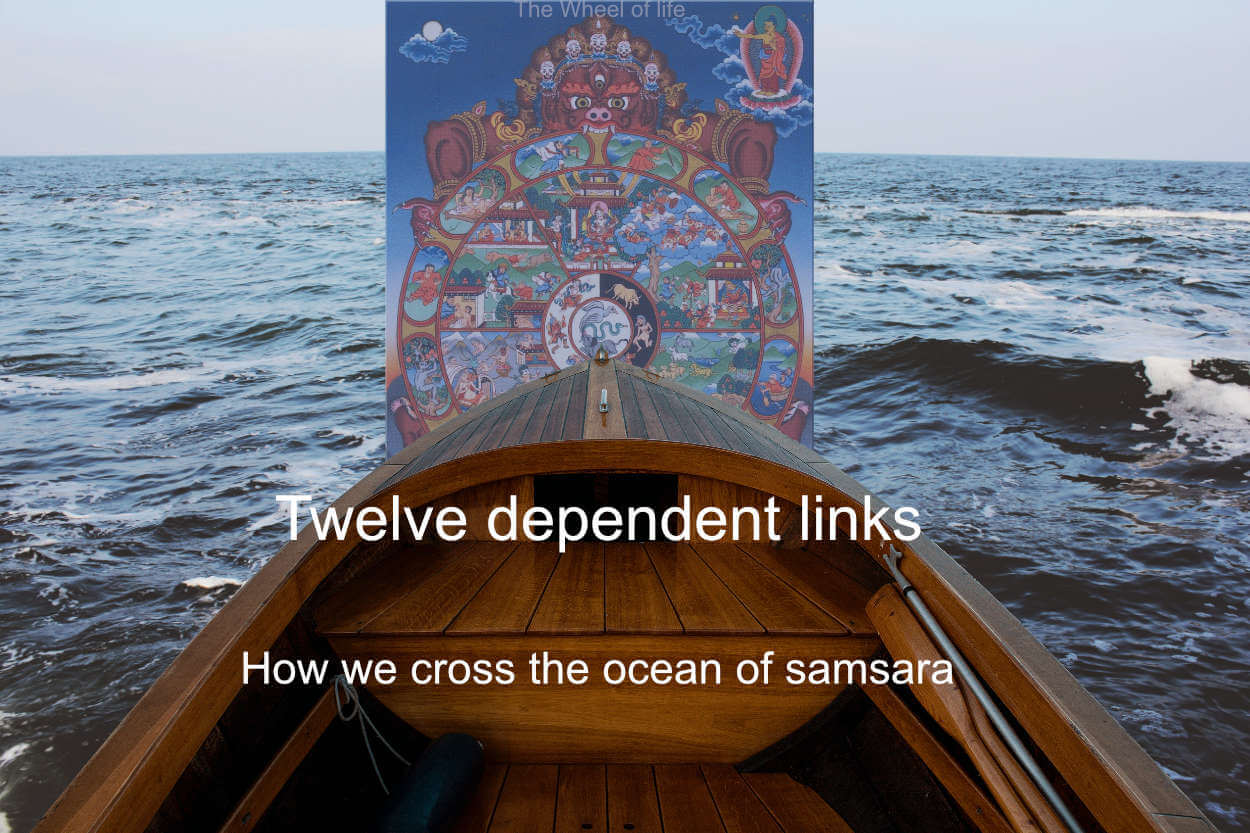 How the twelve dependent links produce the effects of karma

A new life depends on karma. So it is important to know how karma works. We give a breakdown of the cause-and-effect cycle in the teaching on 12 dependent links. These links are the creation cycle that bind us to samsara, suffering experiences. By recognising them we can learn the mechanisms to leave the wheel of life, the round of samsara. As a result, we discover a passage to enlightenment.

In this blog we will delve into the 12 dependent links and how they function to produce a rebirth.

Meditation on the twelve dependent links

The twelve dependent links bind us to the suffering experience that is samsara. They are as follows.

Let’s examine them one by one.

This first link refers to a specific ignorance. We can be ignorant of many things, for example karmic cause and effect. But here ignorance refers to not knowing the true nature of self and phenomena. It is not knowing emptiness and dependent arising. This dualistic view obscures reality. It is the source of non-virtue.

This link is the moment of ignorance preceding an action, a karma. In the wheel of life drawing a blind man depicts the link of ignorance. Blinded by ignorance we make mistakes. A blind man has a walking stick showing that ignorance is feeble. It is feeble because it has no foundation in reality or valid cognition.

Action motivated by ignorance establishes a potential on consciousness. This potential can throw the consciousness into a future rebirth state after death.

In the wheel of life a potter depicts karmic action. The potter sits at his wheel shaping a vase. The potter moulds the unformed clay of ignorance. He creates a new effect, the vase. So the clay is ignorance, the potter action. He has not yet produced his vase. But the potter’s wheel continues to turn. So the potential established by the action continues. It does so without effort until it brings the rebirth that is its effect later in the twelve links.

In the wheel of life drawing a monkey is consciousness. A monkey is restless, curious agile, and never still. The monkey swings from branch to branch. It jumps from place to place. Its perspective is forever changing according to its changed position.

The earlier three links create a karmic potential. This potential in time will cause a rebirth state. The ripening of that rebirth occurs in later links.

Name and form occurs at conception. This is before we develop the sense organs. Here form refers to the body of the embryo. Name refers to the other four aggregates: discrimination, feeling, impulse, and consciousness.

In the wheel of life four people in a boat show the link of name and form. The boat is the form which supports the other four aggregates as they together move through life.

An empty house is the six sources. It has five windows and a door. These represent the five sense powers and the mental power. The house is empty because related consciousnesses are not yet formed.

In this link the mind and sense powers contact their objects. This generates sense and mental consciousness. Contact distinguishes objects as pleasant, unpleasant or neutral.

In the wheel of life drawing a couple embracing depicts contact.

Contact generates feeling, We have good, bad and indifferent feelings. It depends on whether the contact was pleasant, unpleasant or neutral.

An arrow piercing a man’s eye depicts the link of feeling.

From feeling comes craving. We crave more of the good feelings, less of the bad feelings, and allow neutral feelings to continue. Thus we generate attachment to the good feelings. We have aversion to the bad, and ignorance about the neutral.

A man drinking beer depicts craving. No amount of drink satisfies him. It is as if drinking saltwater. Craving is self-perpetuating.

Grasping extends from craving. It’s a more intense form of attachment and so forth. We can grasp for sense pleasures or grasp onto our extreme views. We can grasp and hold onto our self-image.

Craving and grasping activate karmic potentials and throw consciousness into a new life.

In the wheel of life, a monkey grabbing fruit depicts grasping. A monkey will hold onto fruit in a narrow jar even though he then cannot remove his hand. Likewise our own grasping captures us.

This link can be translated as “becoming”. It refers to how the earlier two links activate a karmic potential. They empower it and make it ready to produce a rebirth. This empowered potential is the link of existence. It has the name of the result it will produce, your new rebirth existence. In other translations it has the transitional sense of becoming.

A woman in the late stages of pregnancy illustrates the link of existence.

Rebirth is the first moment of life. It occurs simultaneous with name and form.

A mother having given birth depicts becoming.

Ageing begins the moment after rebirth and continues until death. Death is when consciousness leaves the body of this life and moves to the next.

An old man carrying a corpse illustrates ageing and death.

How the twelve links proceed

The twelve links show the way we move from life to life. But a version of them occurs through every karmic cause and effect.

Any action born of ignorance imprints consciousness. We thus carry limitless imprints. Craving and grasping ripen these karmic imprints. They will then result in a rebirth if the karma has the four complete factors.

Life begins with consciousness conjoined with sperm and ovum, the link of name and form. As the embryo develops the six sense powers develop. There is contact and from that feeling. From good and bad feelings comes craving, grasping then existence. Existence leads to rebirth and then ageing and death.

The first three links are projecting causes. When the action is a complete karma these three project a future rebirth.
The time of that rebirth depends on craving, grasping and existence. They are the actualising causeswhich actualise the potential into its rebirth state.

The fourth to seventh links are the projected effects. They are name and form, six sources, contact and feeling.

Rebirth, ageing and death are the actualised effects.

Meditation on the twelve dependent links over two lifetimes

The following illustration shows how we complete a cycle of the twelve dependent links over two lifetime’s. Causal links occur in one lifetime and the effect links in the next lifetime. 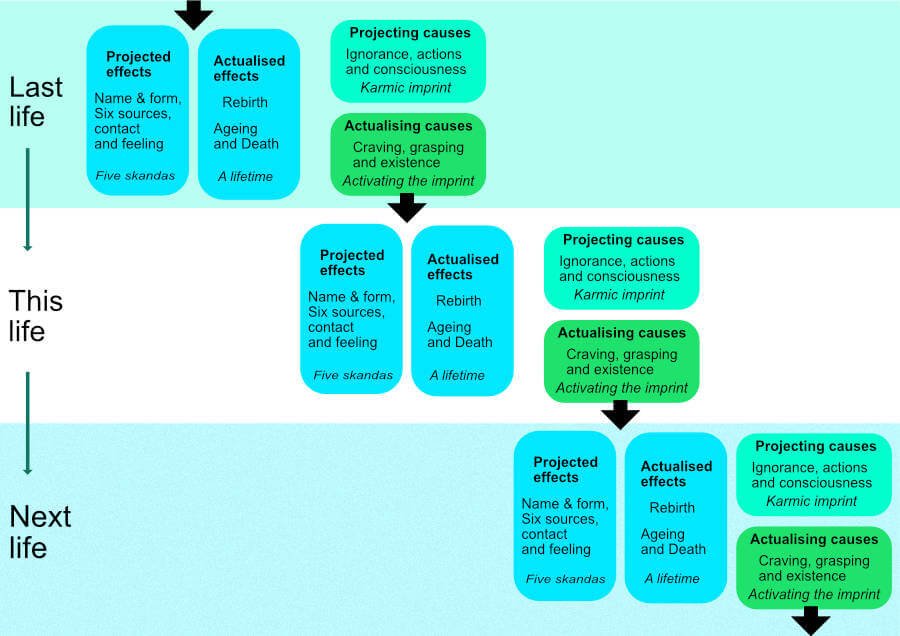 Meditation on the twelve dependent links over three lifetimes

A cycle of 12 links could span three or more lifetimes. The diagram below illustrates this. Here the projecting causes can occur in a lifetime before the actualising causes. Again both sets of effect causes occur in the same lifetime. 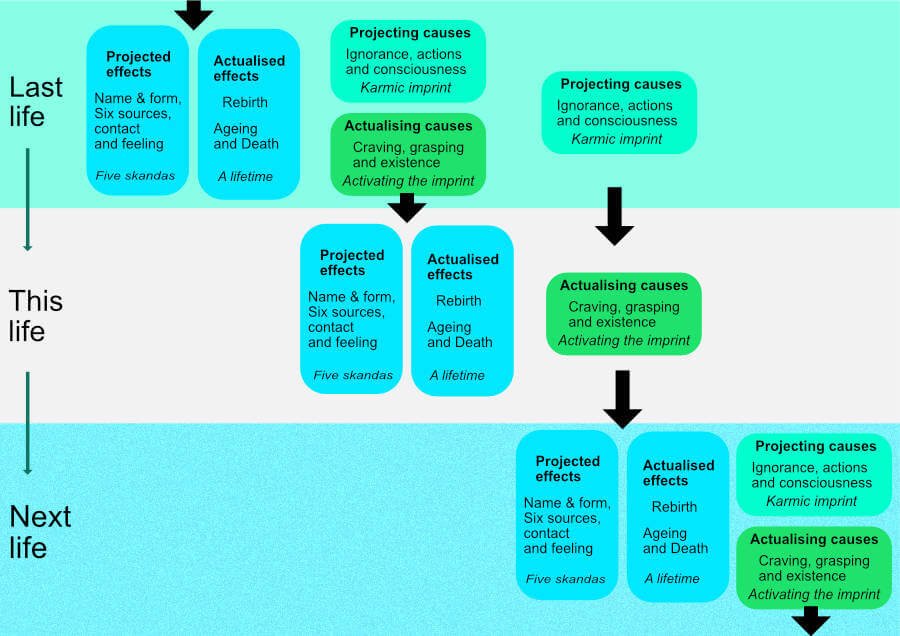 How can we escape the cycle of samsara

The cycle of reincarnation is beginninless, but does have an end. We move up and down through the realms of samsara by way of the twelve links. Meditation of the twelve dependent links show us the way to be free. It shows us how to break the cycle.

If we wish to break the cycle of samsara, the links of ignorance and craving are our best hope. If we overcome ignorance the 11 links that follow are pure and do not bind us to samsara. These are the 12 links of the pure cycle.

If we are as yet powerless to conquer ignorance we need to do our best to reduce craving. If we use non-attachment, hone our mindfulness and awareness, and build up our wisdom we can overcome craving.

We escape samsara by developing wisdom, meditation and mindfulness founded in ethics. With these three the action link, karma, creates a virtuous and happy future. The twelve links are an excellent framework within which to understand the workings of karma.