Background of our meditation teacher and teachings

Toby Gillies and his teaching lineage

The Buddhist monk, Toby Gillies gives meditation classes and retreat days in Melbourne. The Hawthorn location serves Melbourne inner city and the eastern suburbs. Toby presents the methods of spiritual growth contained in the Buddhist teachings. He follows the Dalai Lama’s form of Tibetan Buddhist wisdom. There are weekly introductory meditation classes in Hawthorn on Tuesday evenings as well as Buddhist teachings. Periodic retreats form a comprehensive program of study and guided meditation.
A quick look at where these teachings originate, from the Buddha himself to the present day, is set out below. A feature of the Tibetan approach is that the present day teachings come in an unbroken lineage. This lineage extends from the Buddha to his immediate ordained disciples, and them to theirs. It continued through the great scholar monks of India and Tibet, until our teachers today. So it is now that we see the beginnings of a transmission to the West.
Toby Gillies represents the birth of the tradition into modern Western society. He presents a timeless wisdom for the here and now.
A brief bio. of Toby is at the bottom of this page.

The Buddha and Buddhism

Two thousand five hundred years ago an Indian prince left the palace of his youth. Prince Gautama Siddharta went forth to seek a solution to the suffering he observed. So he wandered and studied under the known spiritual teachers of his time. In time he realised he must find his own way and then practised meditation on his own. Through practise he perfected virtue and eliminated all faults. He attained Enlightenment, transcending all suffering and limitation.
As a Buddha, an Awakened One, he set out his realisation and the scope of his Dharma teachings in four great truths. These Four Noble Truths are: 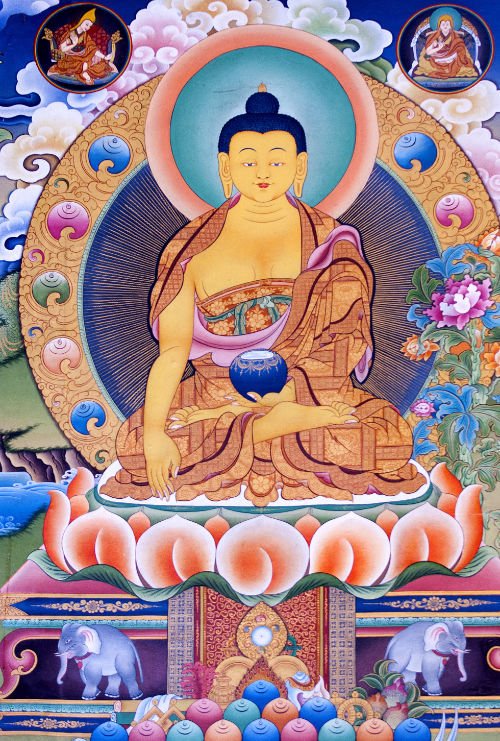 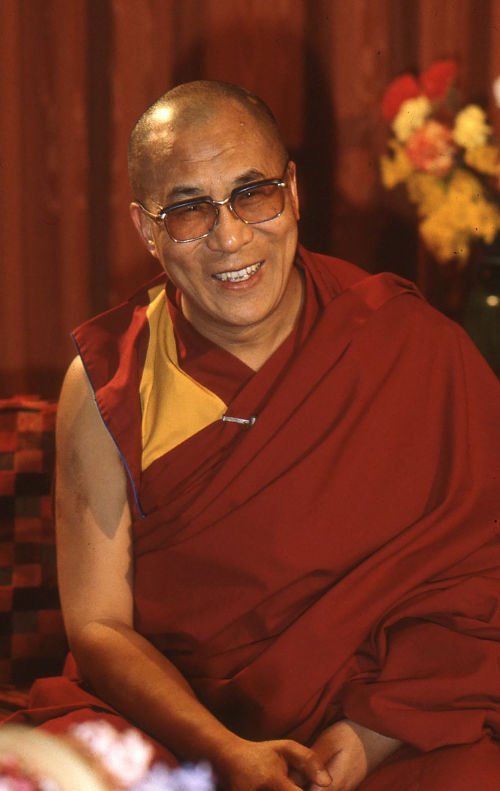 His Holiness the Dalai Lama of Tibet

Tibetan Buddhism in the West today

Over the last fifty years Tibetan Buddhism has proven a great influence in the modern world. This ancient tradition has contributed much to the fields of philosophy, psychology, neuro-science and a variety of disciplines exploring human potential.

The Dharma comes to Australia

The sad events of 1959 had a silver lining. It gave the world their first real contact with the teachings of Tibetan Buddhism. Westerners began to establish centres and invite teachers. Thus in 1976, the great scholar-monk Geshe Thubten Loden arrived on our shores. He became the first resident Tibetan Geshe in Australia.
Over time Geshe Loden went on to form the Tibetan Buddhist Society where he taught until he passed away in 2011. He established the first traditional Tibetan temple in Australia in Melbourne. He then established a second in Perth. Geshe-la authored nine authoritative books. They present the essential theory and methods of practice of Tibetan Buddhism.

Those who knew him well considered Geshe Thubten Loden to be a Buddha for our time. A man of immense compassion, he inspired thousands toward enlightenment. He cared for them in all aspects of their spiritual development. Geshe-la planted the seeds of Tibetan Buddhism in the hearts of Australian people. He helped them in the formative development of this tradition here. No doubt, his legacy will live for a long time. He is the revered teacher of Venerable Toby Gillies.
Geshe-la believed that Australians were attuned to the Tibetan Buddhist approach. He said this was due to the high standard of education. He noted an inclination toward logic and sound argument. Like the Dalai Lama he believed the scientific and Buddhist approaches were compatible. He said, ‘Western people like to find a method to improve. They like meditation and mindfulness, rather than relying on blind faith. The Buddha’s teachings rely on such methods. Diligent practice brings results and success in inner development.’
Geshe-la put great thought and particular effort into the books that he produced. He aimed to condense the teachings most useful for Westerners. Geshe-la wanted them to gain the benefits of enlightenment. His three books on the Path to Enlightenment were that foundation.
Geshe-la was a prince among scholars and graded highest of the high in his Geshe examinations. He approached teaching with the clear reasoning of a fierce debator. But his first priority was to help his students to engage in practice. His choice of subjects for his books reflect this. 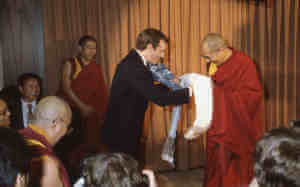 The Dalai Lama officially welcomed to Australia in 1982 by Toby Gillies for his first visit to this continent.

Geshe Thubten Loden gave full ordination to Venerable Toby Gillies. Toby had become his disciple when he first arrived in Australia and studied with Geshe-la for thirty five years. He was living, teaching and working with him in translating and writing his books. Through this Toby has developed a keen awareness of how the modern western person can enrich their lives with the wisdom of Tibet. Venerable Toby gives the classes and retreats set out on this website.

The meditation classes in Melbourne

When asked why he started these classes Venerable Toby replied,
‘Why am I doing this? It is that I cannot watch the misery plain in modern life. Look at the intolerance, the harm, the abuse. What can we do? How do we fix the emotional turmoil, addiction and the absence of consideration. These sufferings are not necessary. We do not need them. The Dharma teachings show how to fix them and so much more. I am blessed to have discovered these teachings. They give a way forward to anyone, of any background, age, race or gender. So I am compelled to do what I can to pass on the solutions and teachings that I was so fortunate to have received.
This solution is a simple change of perspective. So it is a new view based on wisdom, a wisdom that arises from the practice of meditation. Yet it is not only a solution to the stress and problems which afflict modern society. Also it is a path to realise one’s greater potential, to discover both obvious and hidden gifts. Through this we can share ever more joy, tranquility, love, bliss and rapture in every moment of life.
I have been fortunate enough to spend the major part of my life under the close care of a great spiritual teacher, Geshe Thubten Loden. He has been my precious Guru and dearest friend. The kindness he showed me, compels me to share something of the wisdom he imparted. I would love to see everyone able to share in the joy and blessings that his wisdom has brought to my life. Although I know we cannot reach everyone I will teach anyone who has an interest. If even one person gains some benefit, it is satisfaction enough.’ 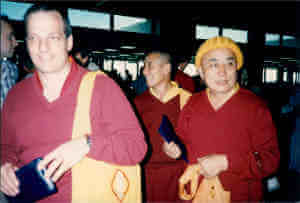